Above the Arctic Circle 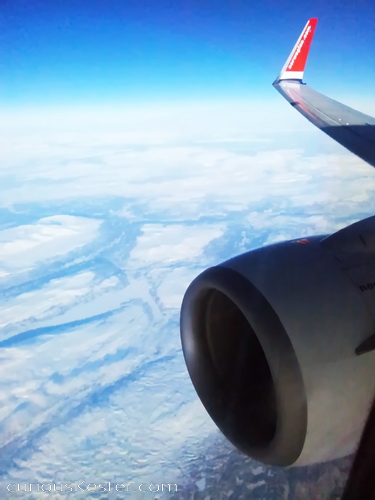 Then it pays off to be in a wheelchair

I hate the cold, hence we often travel to warmer countries.
When you sit in a wheelchair, you can not run yourself warm, do cartwheels, somersaults or jump on the spot.
Are you cold, there is no turning back, you only get colder as the minutes go by, and I can’t stand it.
Due to my disability, the coldness makes my joints hurt, so it’s not just because I am a crybaby.

On this trip to Tromsø, above the Arctic Circle in Norway, I learned a  G R E A T   T I P if you are in a wheelchair!
When arriving at the airport we went in line for a cab to bring us into the city.
The first new taxi-driver to arrive stopped right in front of us, even though we were number 25-35 in line.
First I felt a bit embarrassed to skip line, and I asked the taxi-driver if he was sure this was the way to do it?
He said; “Well I’m only doing what the law tells me to do.” “Handicapped people are always first priority because you have limit options when it comes to use public transportation. The cold is bad and you sit still without being able to move to get warm.”
I can already tell; this is going to be a wonderful trip! 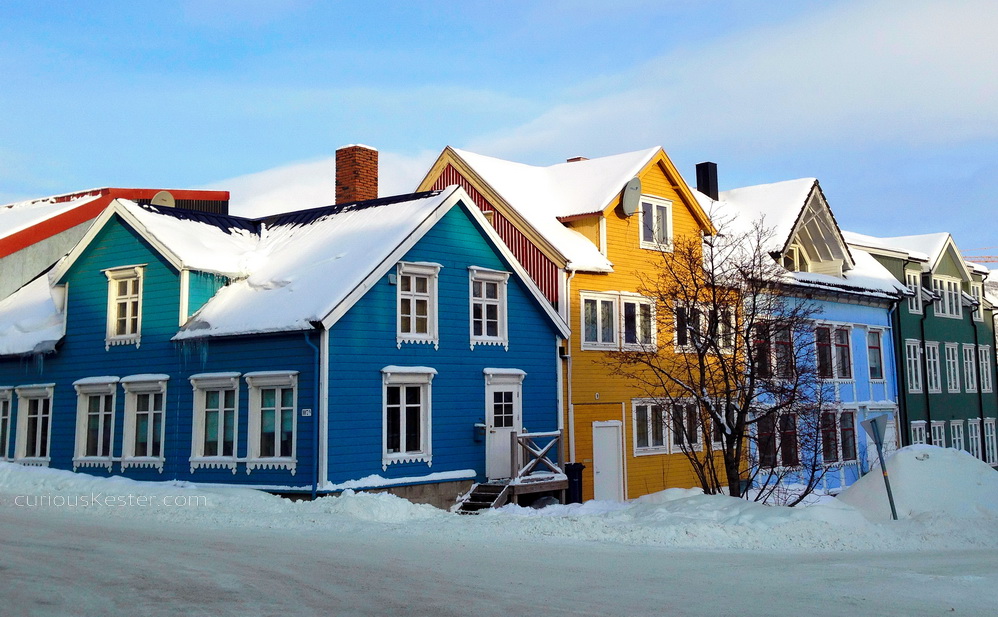 Tromsø is called he capital of the Arctic, and our main focus in this part of Norway, is to see the Northern Lights. There is never any guaranty with nature, so all we can do is cross our fingers and hope for the best.

We are 350-400 km above the Arctic Circle, some 2200 km south of the North Pole, in the far north of Norway. Some people claim the climate is pleasantly moderated because of the Gulf Stream. I however only felt the cold. I think they must have hidden the pleasant climate somewhere far away when we were there. It was no were to be found. 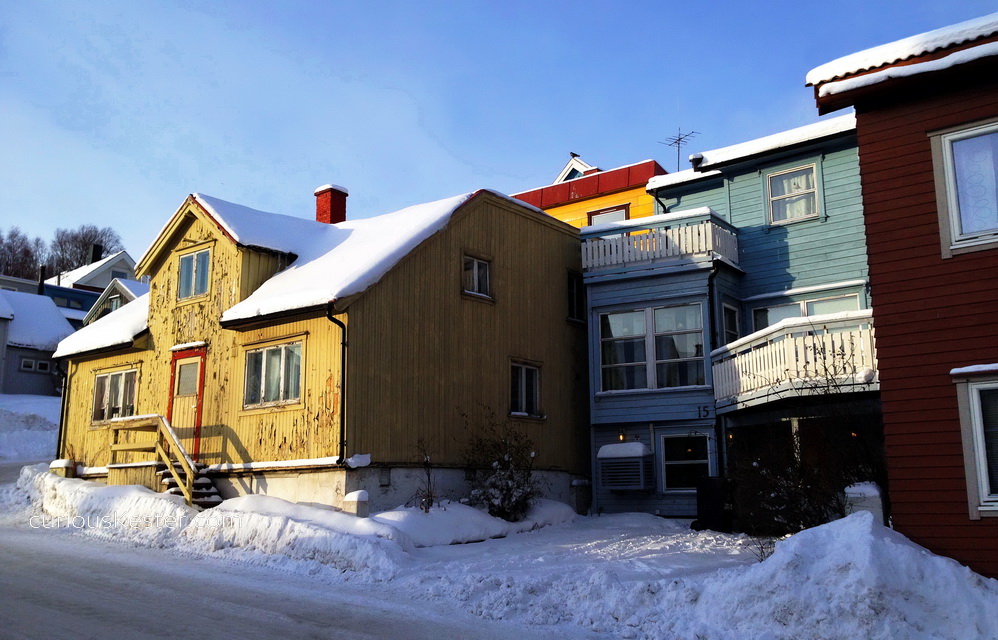 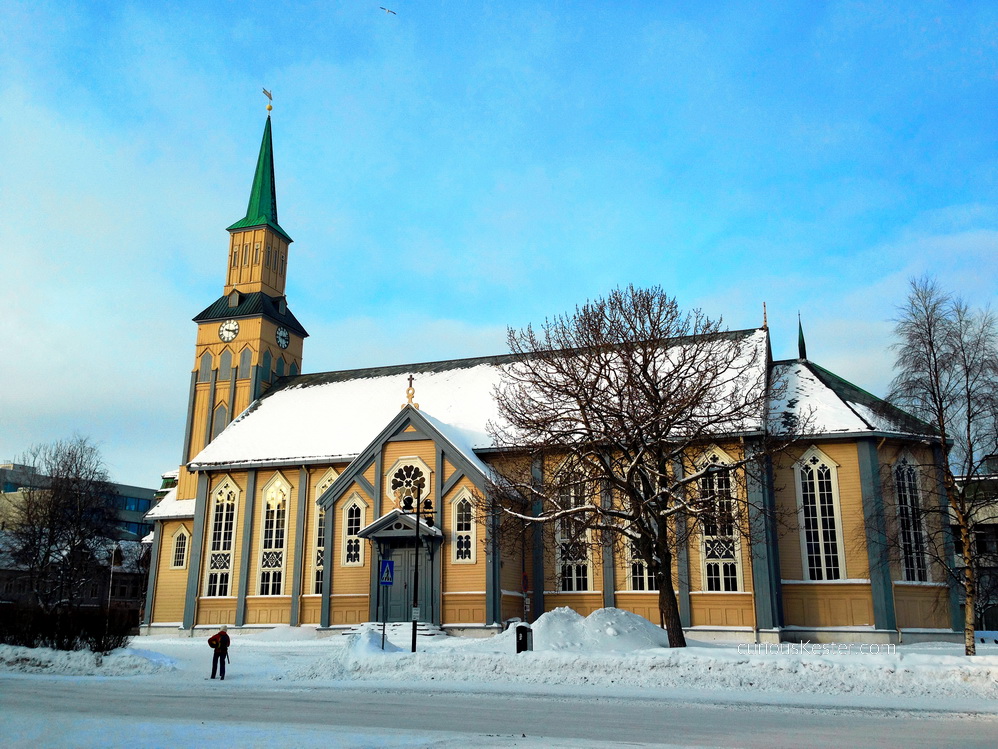 Yet Tromsø is surrounded by gorgeous snow covered mountains, jaw dropping fjords and islands. It’s a quiet but beautiful city with culture and history. The main part of town stretches along the east shore of the island of Tromsøya, which in English often becomes to “Tromsø Island”. The island is linked to the mainland by a gracefully arched bridge.

The city’s remarkable center, on the island of Tromsø, is notable by its centuries-old and colorful, wooden houses. The streets are not too large and traffic crawls by. It is reminiscent of a scenery to a Christmas Carol. The snow is spread out like a wall-to-wall carpet, glistening with white ice crystal , which sparkles in the sun. It all looks adorable and so idyllic. 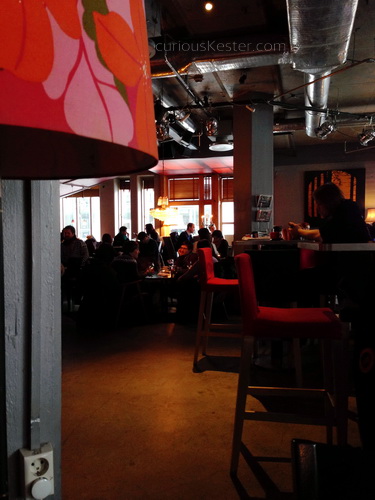 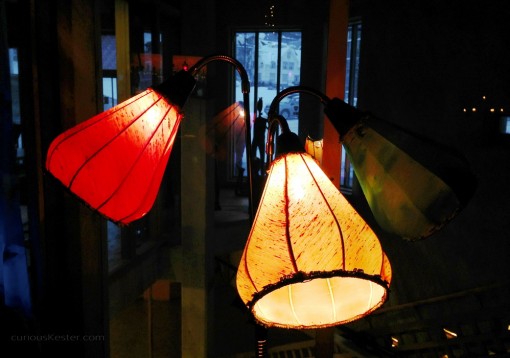 Eating in Tromsø is not for the poor. I know a lot of people think Denmark is expensive. As a Dane I’m used to the prices in Denmark, and enjoy the-able-to-pay-prices when we usually travel.
Even though a bell ring in the back of my head; telling me eating and drinking in Norway is outrageous, I was taken with my pants down. If going to Norway, bring extra cash! 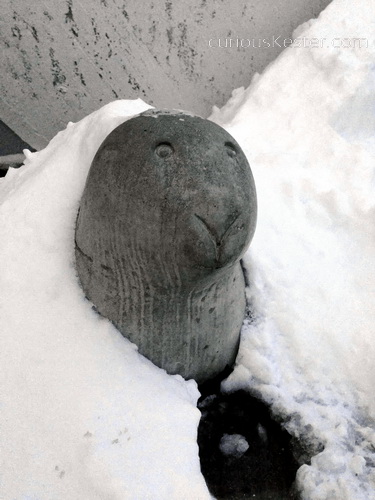 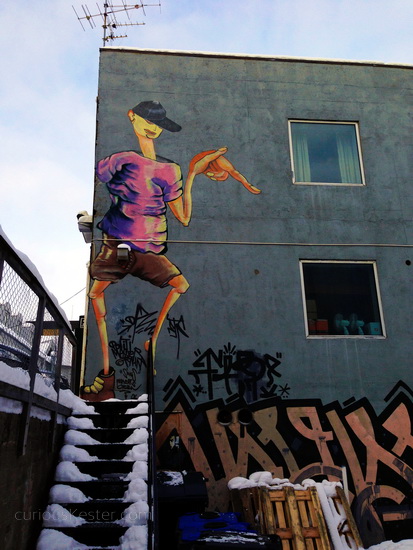 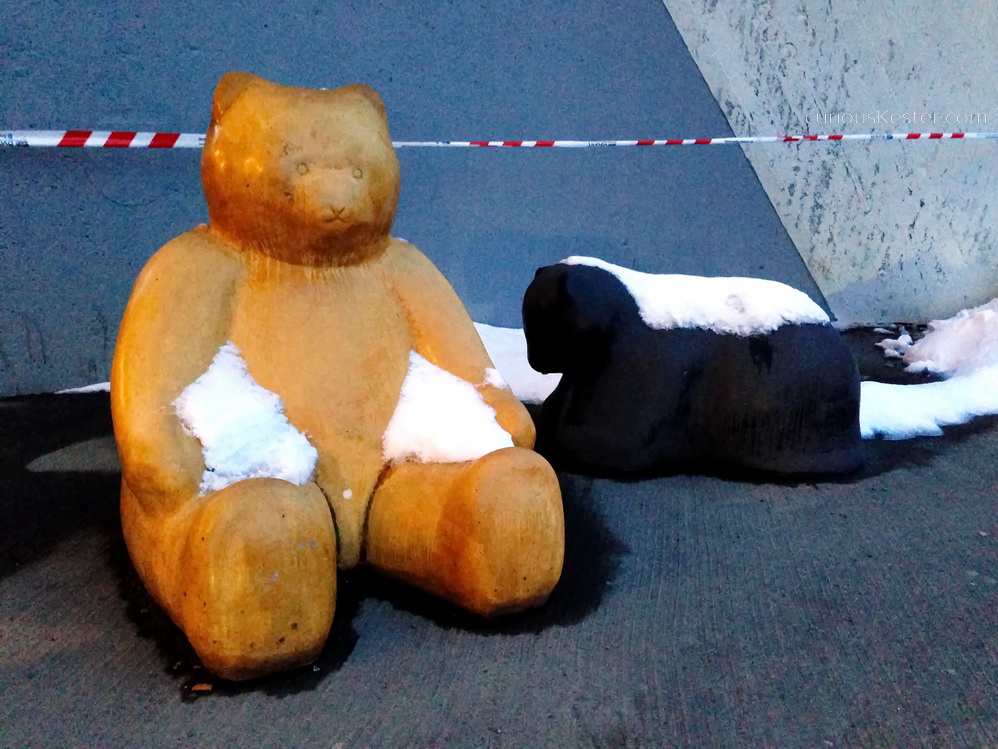 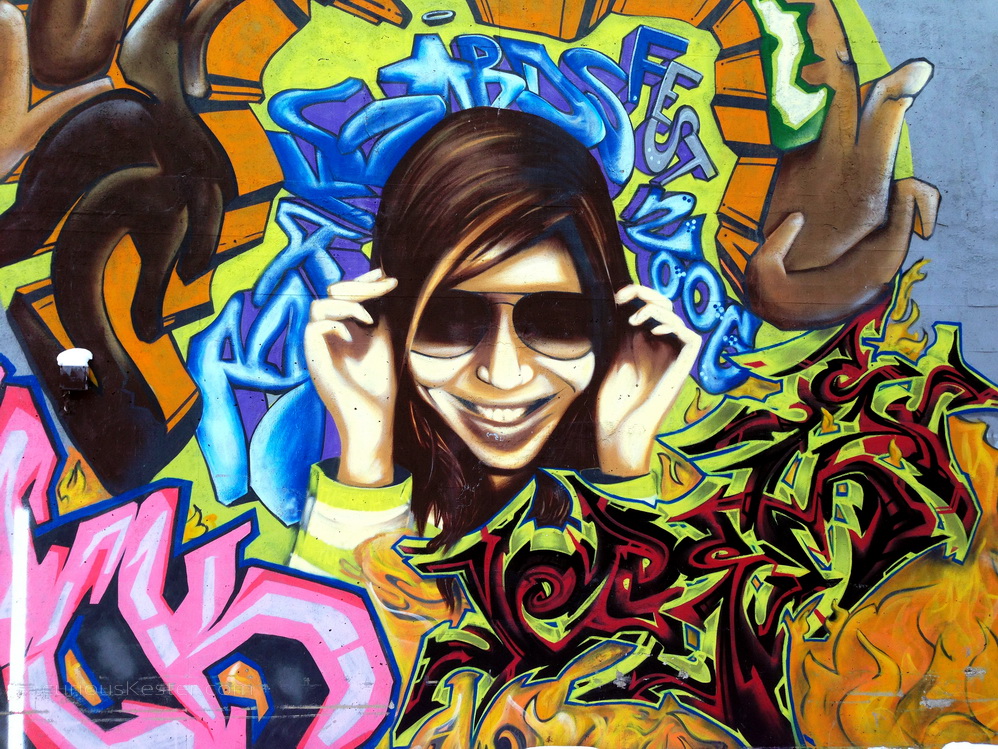 The art scene thrives in Tromsø. You can find several galleries and the street-art is beautiful. 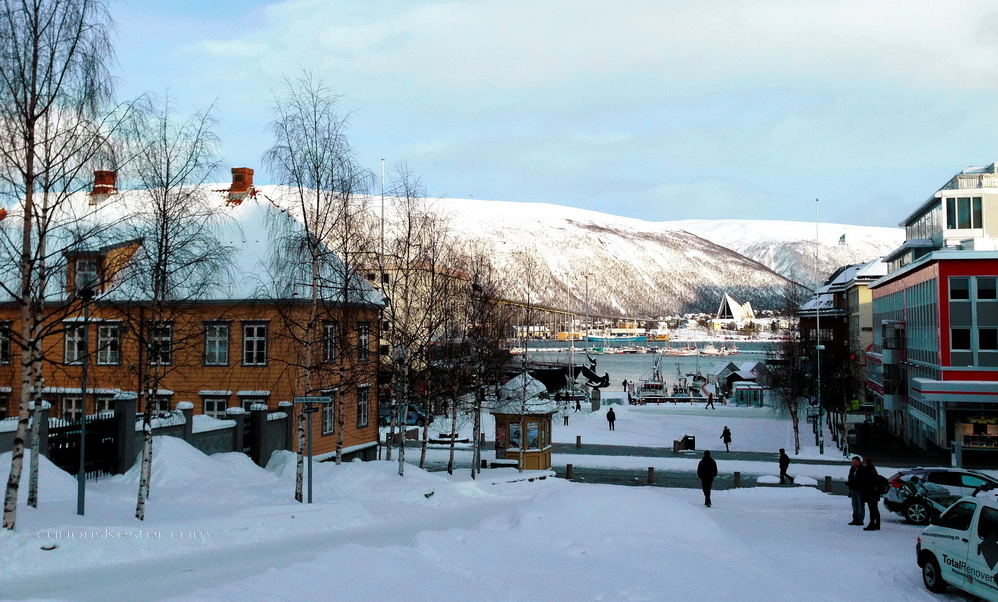 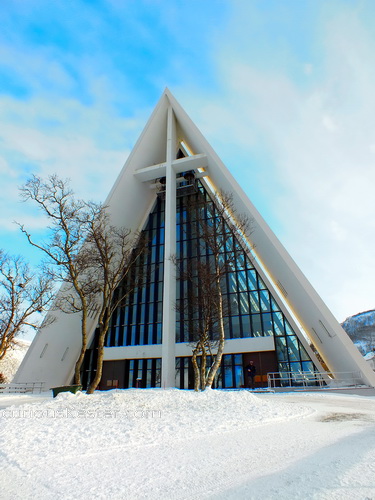 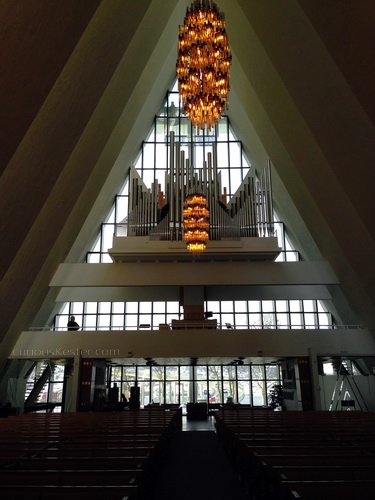 Well we didn’t just went east of Tromsø. We went north, west, east and south. We rented a car because that was the only way I could join the many trips we did in the area.
The landscapes are intoxicating, and I enjoyed ever minute of them in the nicely heated car. 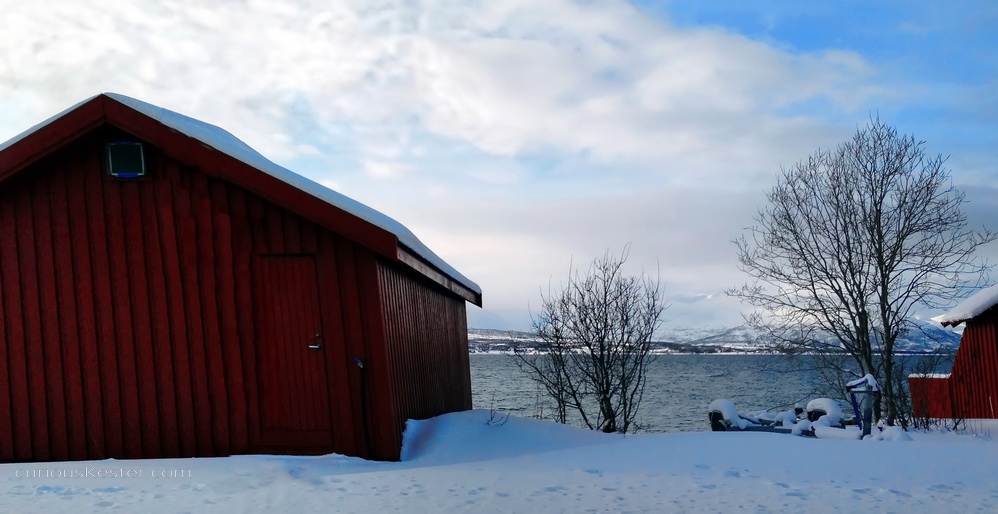 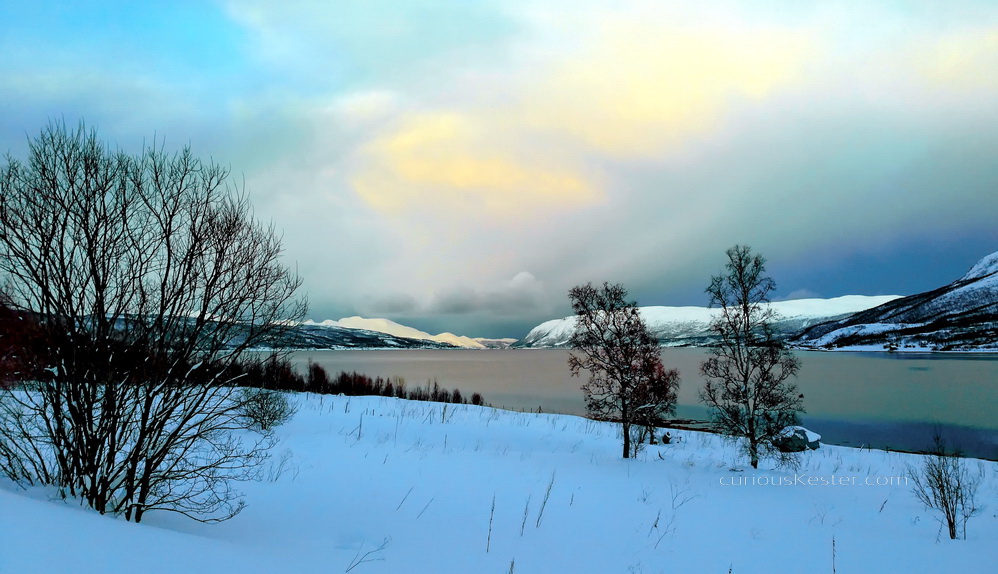 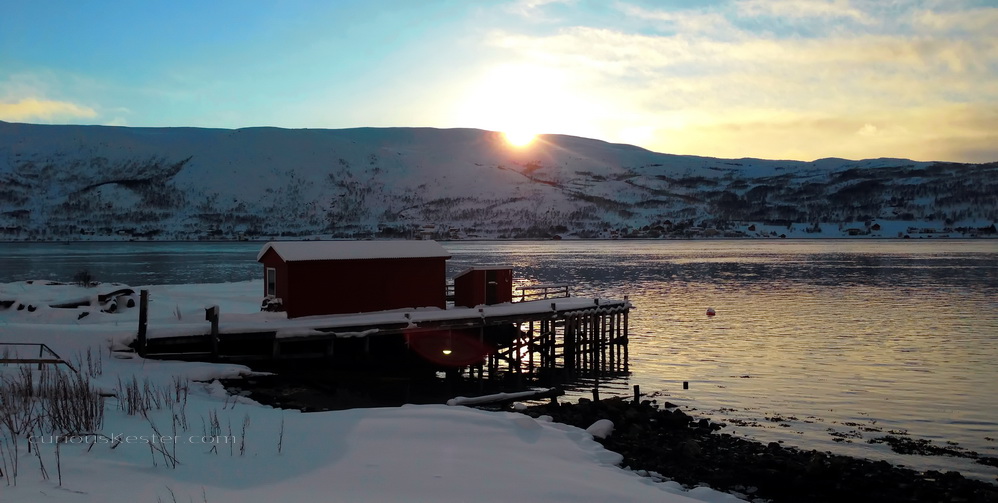 The red stick you see on the photo is to read how deep the snow level is. Occasionally we see them almost buried, then we choose to go in a different direction. 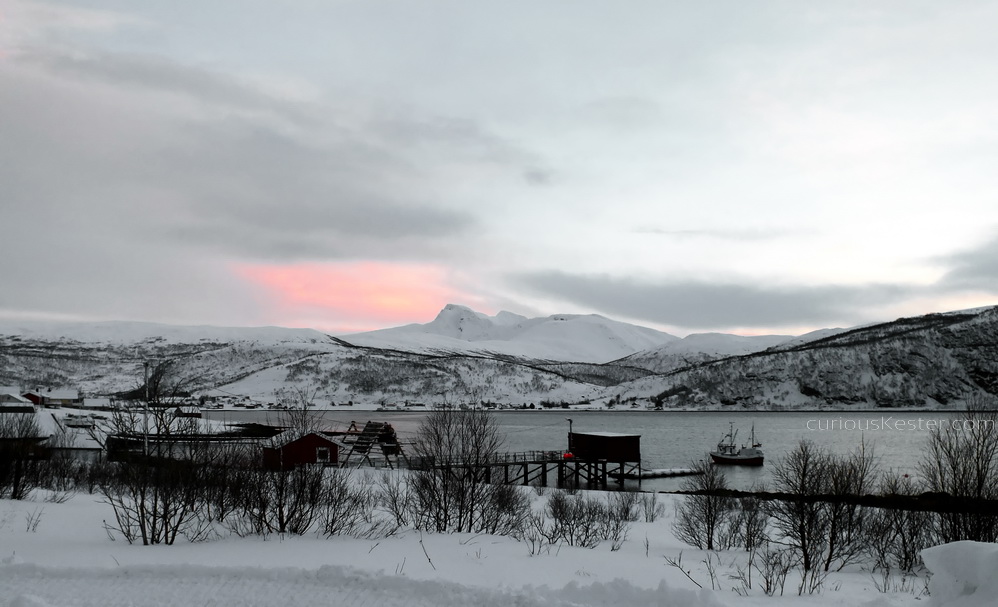 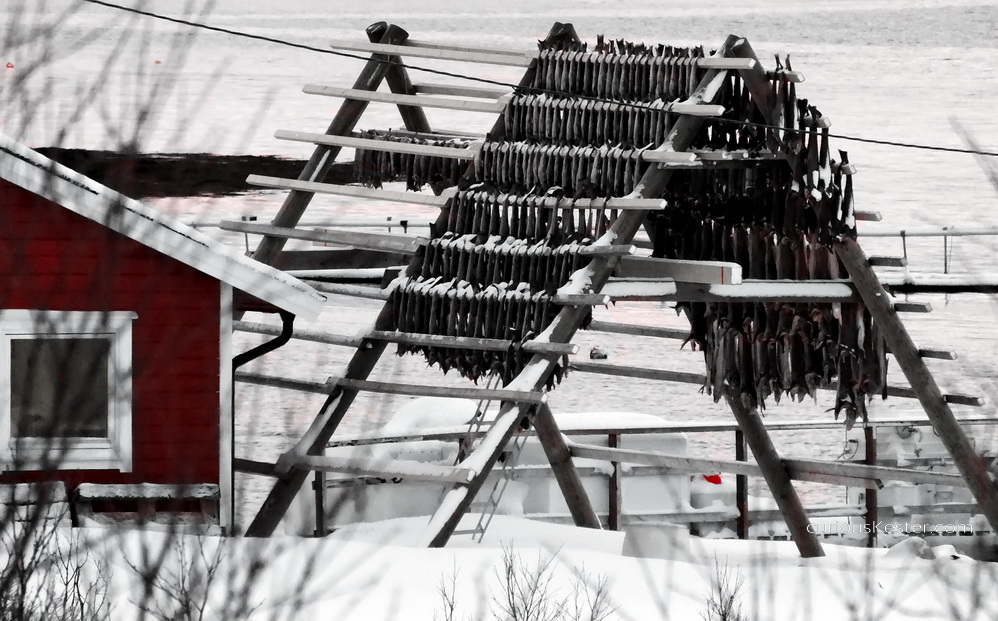 I’ve had fun with some of the photos. 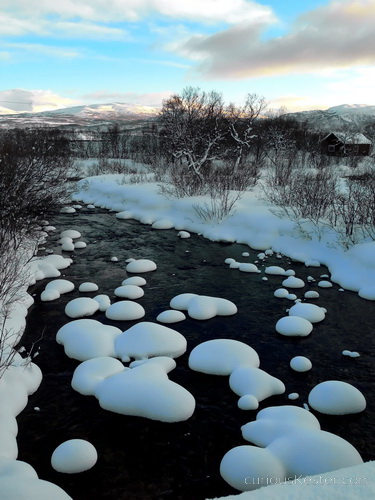 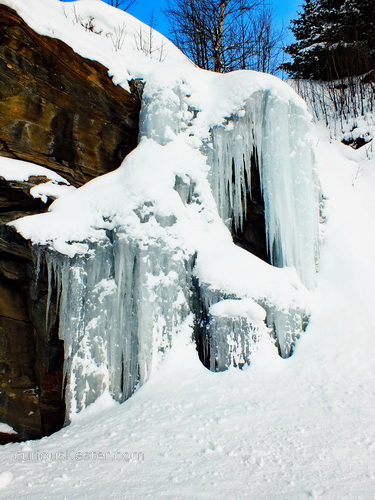 No matter where you look, the snow lays thick and consistent. 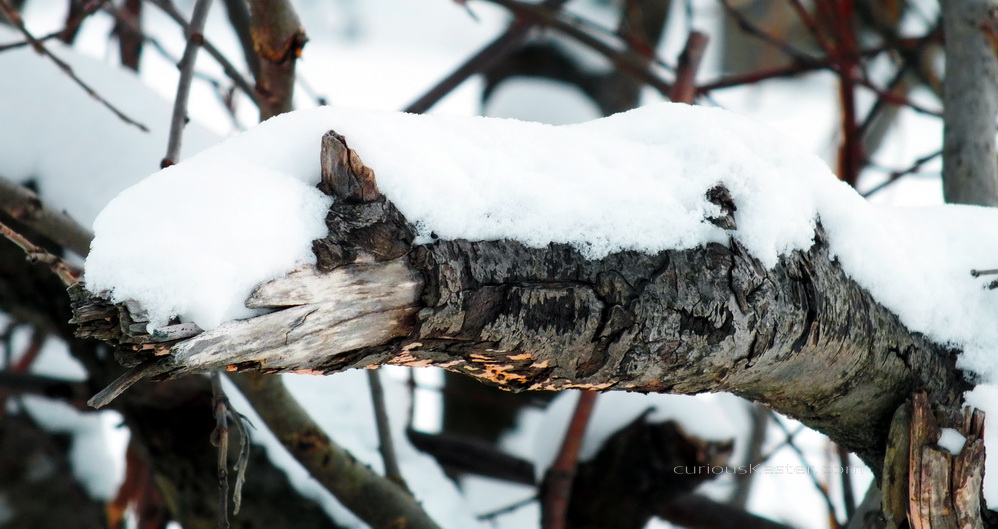 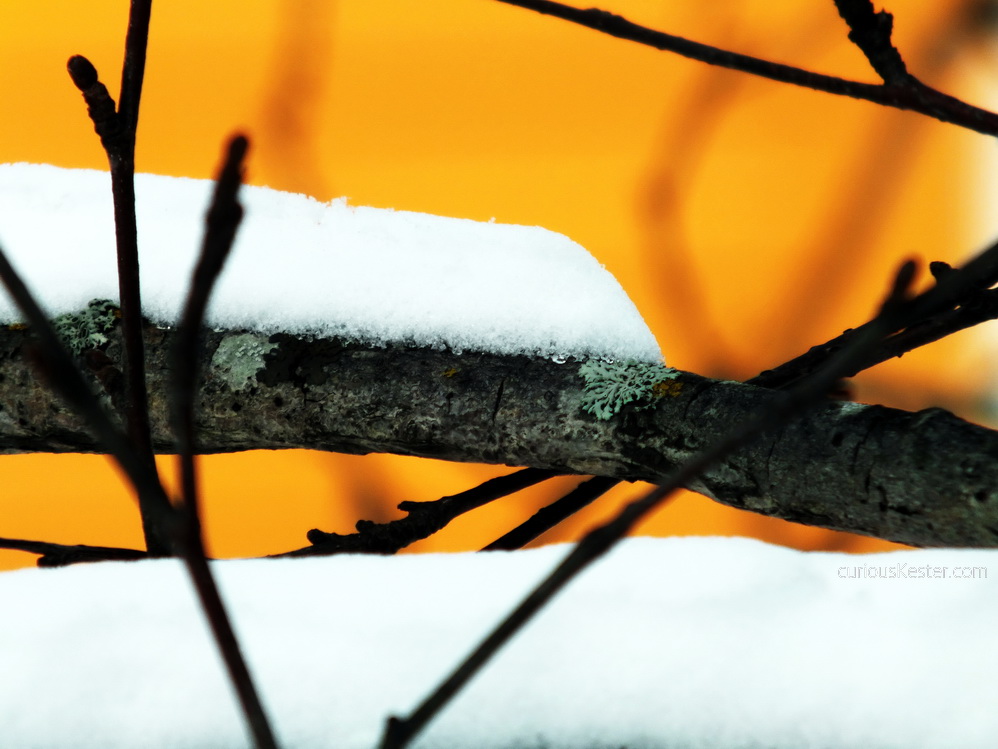 The daytime is absorbed with beautiful images of the Norwegian mountains, clear blue sky, turquoise fjords, drifting clouds leading us from village to village. We drive from island to island and up and down the coast of the mainland. 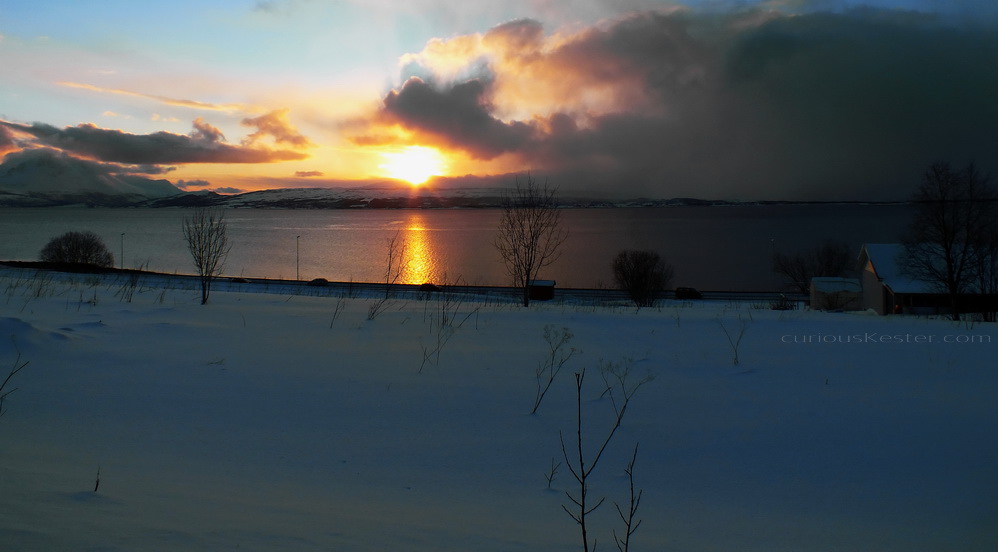 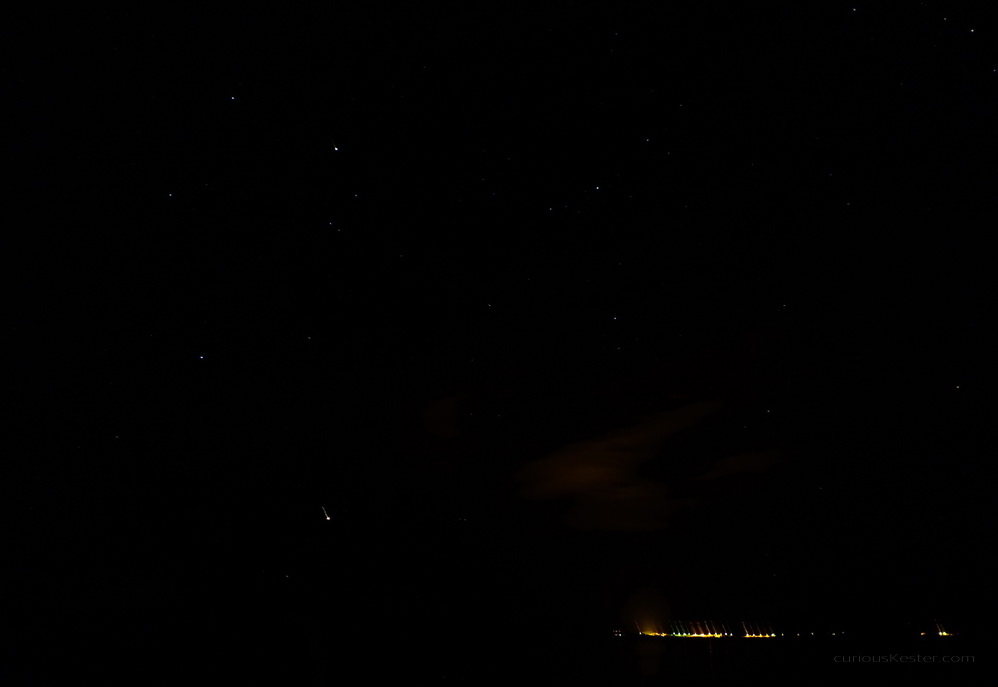 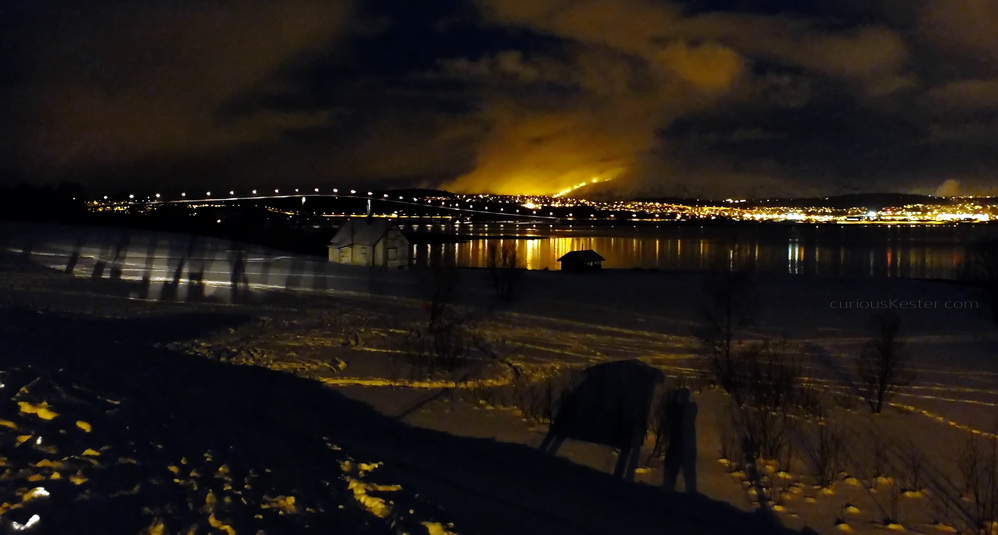 The Northern Lights in our hearts

We also drive quite a lot during the night time, but not as far away from the city. Just far enough so the sky isn’t lit up by the city light. It’s a constant hunt to see the Northern Light.
I think we are both quite pessimistic. Hour after hour we talk about what to expect, which direction to look in, how far away is it? The mind spins and your imagination has no limits of what to hope for.

The last night with a clear sky there are a sudden marking on the sky. Two long lines that move synchronously. Then, more and more. Different patterns and shapes that winds and twists, jump up and down. The Northern Lights is dancing. YES !!! Then it finally happened. It is magical and wonderful. The next few hours we will have our very own light show above us. The Arctic sky can be rather special, it conjures treasures.

Dieter tried photographing it, but unfortunately the light is not strong enough to get into the picture. But we have seen it and will always carry the magic in our hearts. 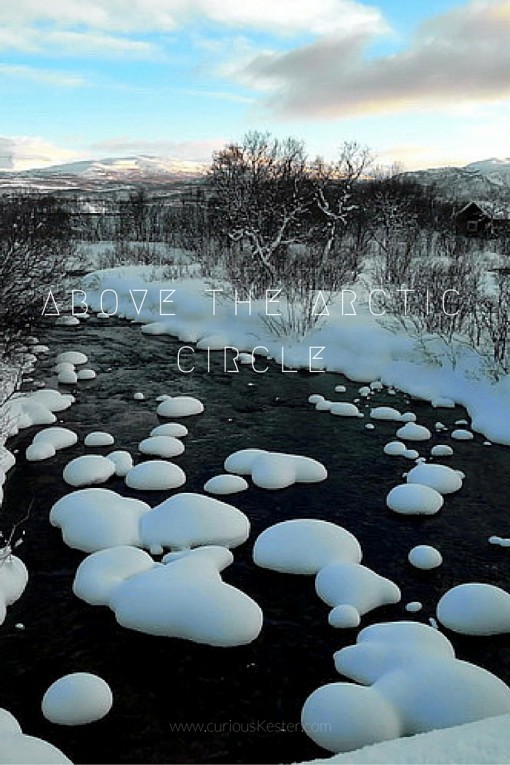 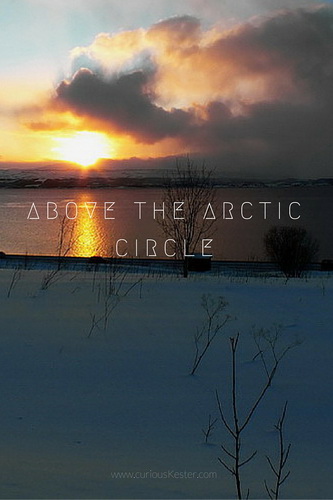