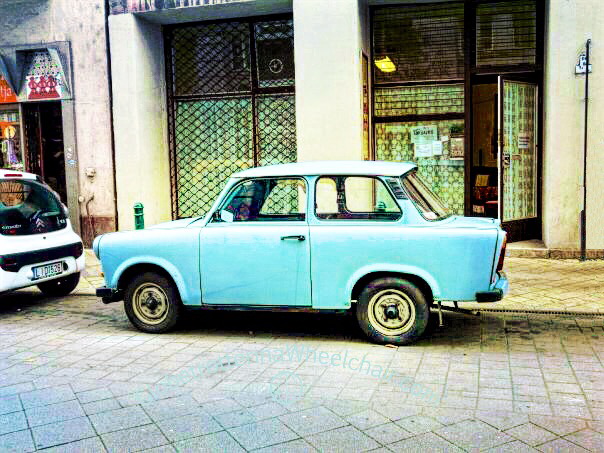 Today the Trabant is in some cases, trendy or cult for collectors to buy. Some think of the car as a joke.
But I assure you the people in former GDR waiting for a new car up to ten years did not think of it as a joke.

Due to the long waiting period ordering a Trabant, used Trabants would fetch higher prices than new ones. The new owners who finally received their own Trabant treated the car with care and were fussy in maintaining and repairing it. Lifespan of an average Trabant could be up to 28 years.

The car was produced by former East German auto maker VEB Sachsenring Automobilwerke Zwickau in Zwickau, Saxony and only few left the country.

The originally idea when making the Trabant was to design a three-wheeled motorcycle.

In German, a Trabant is an astronomical term to express a moon or other natural satellite of a celestial body.

In its Slavic origin, Trabant has the same meaning as the Russian word sputnik, namely  “satellite” or ‘companion’. So the name was inspired by Soviet Sputnik.

The cars are often referred to as the Trabbi or Trabi.

The Trabant was a steel frame design with the roof, trunk lid, hood, fenders, and doors made of Duroplast. Duroplast is a hard plastic made of recycled materials: cotton waste from the Soviet Union and phenol resins from the East German dye industry.
This made the Trabant the first car with a body made of recycled material, and it was produced for nearly 30 years with almost no significant changes; 3,096,099 Trabants were produced in total.