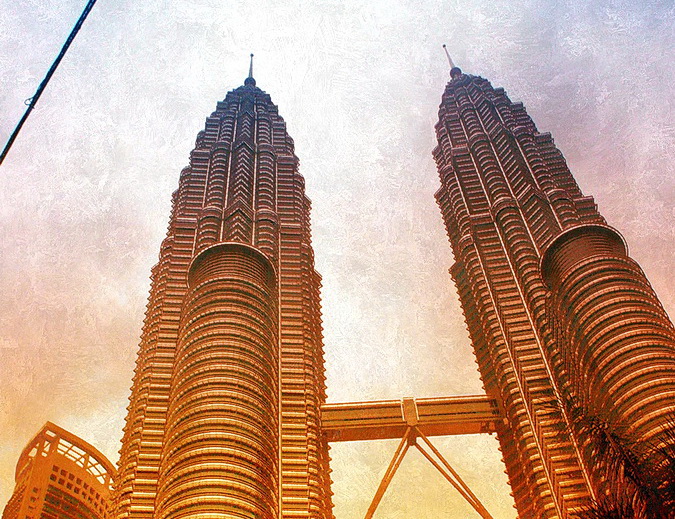 The Petronas Tower are twin skyscrapers in Kuala Lumpur, Malaysia.

With 452 meters they were the tallest buildings in the world from 1998 to 2004 and remain the tallest twin towers in the world replacing the World Trade Center in New York, according to the Council on Tall Buildings and Urban Habitat (CTBUH).

The buildings are quite a landmark of Kuala Lumpur. Dieter and I visited the twin towers in 2003. Nearly ten years had gone by since our previous trip to Malaysia and Kuala Lumpur had changed to such an extent that it was hard to recognize.

Beautiful Petronas is designed by Argentine American architect César Pelli.
The twin towers were built on the site of Kuala Lumpur’s race track. The test boreholes found that the original construction site effectively sat on the edge of a cliff. One half of the site was decayed limestone while the other half was soft rock.
The entire site was moved 61 meters to allow the buildings to sit entirely on the soft rock.

The 88-floor towers are constructed largely of reinforced concrete, with a steel and glass facade designed to resemble motifs found in Islamic art, a reflection of Malaysia’s Muslim religion. The building is based on the five pillars of the Islam, which can be seen in the round shapes of the towers.
Another Islamic influence on the design is that the cross section of the towers is based on a Rub el Hizb, (a Muslim symbol represented as two overlapping squares, which is found on a number of emblems and flags. In Arabic, Rubʻ means “one fourth, quarter”, while Hizb means a group or a party), albeit with circular sectors added to meet office space requirements.

Walking across the world’s highest double-decked bridge between the Twin Towers gives you a great opportunity to a fantastic view of Kuala Lumpur 170 meters below.

Just think twice before going, if you are afraid of heights.