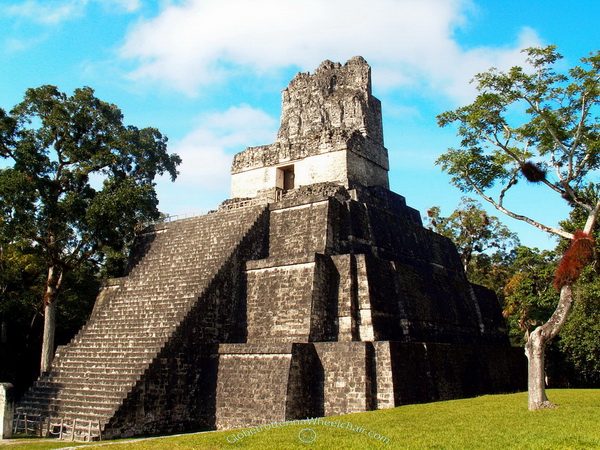 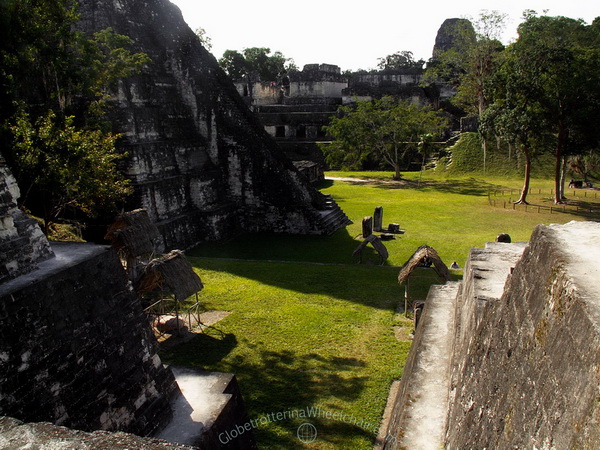 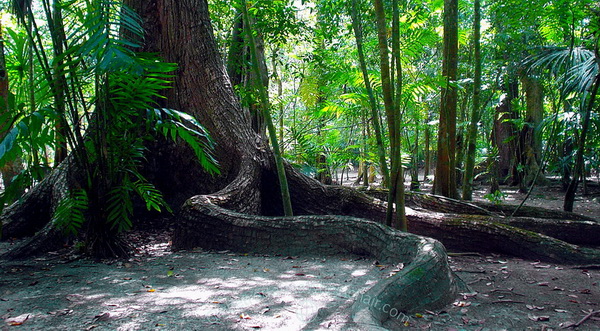 We have been traveling around Central America and are now in Guatemala. Many did tell us to be careful, especially in Guatemala City where the crime rate is high. I felt very secure through out our journey through Guatemala, enjoyed the colorful country and we never experienced anything uncomfortable. 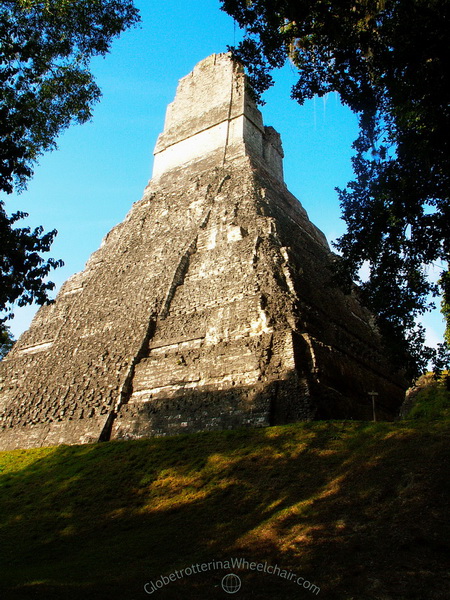 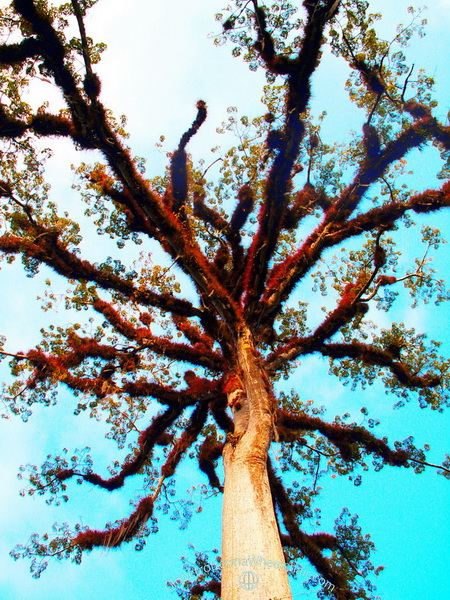 Just after Guatemala City we took the bus to Flores in the northern part of Guatemala. Only 50 km. northeast from Flores we visit Tikal.
Tikal was the largest of Maya cities during the Classic Period (200-900 AD), and I was so excited to visit this magical place. 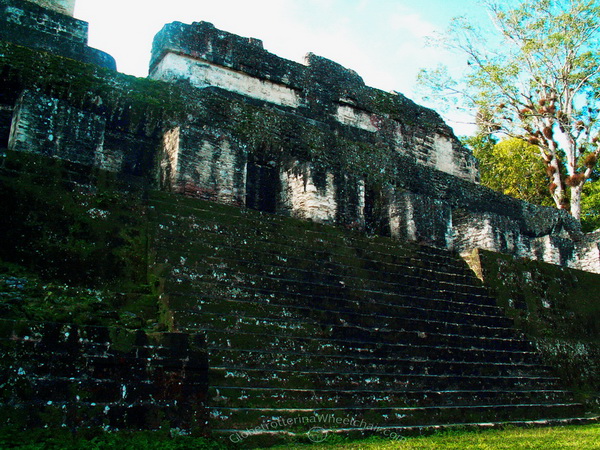 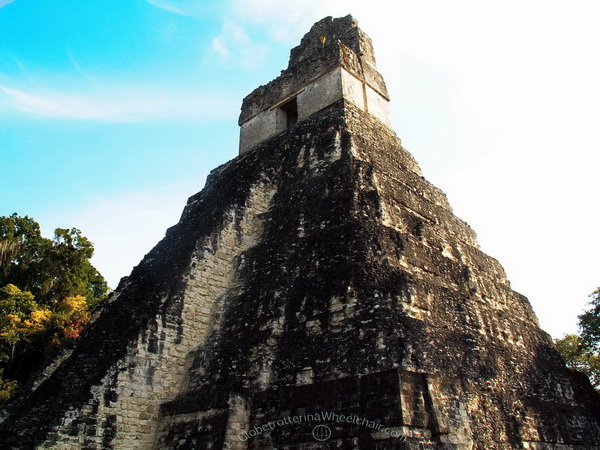 In the rainforest in Guatemala you’ll find Tikal, an ancient city and ceremonial centre of a Mayan civilization that flourished around 700 AD.
During the Classic Period it was one of the largest and most important of the Mayan cities, which dates back as far as 400 BC.
About 10,000 people lived in the city center and 50,000 more occupied outlying areas.
Most of the ruins which are still visible today were built in this period, when the art, architecture, farming, writing and city planning at Tikal was extraordinarily advanced. 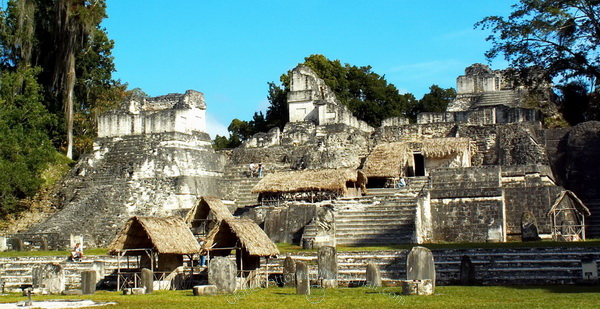 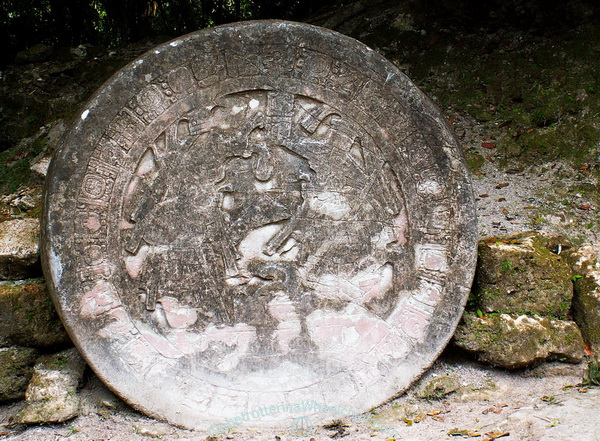 Tikal often clashed with other cities in the region, and was eventually defeated by Caracol in 562 AD.
King Ah Cacau returned Tikal to its former glory about a century later, and it remained somewhat prosperous until the general decline of Mayan civilization around 900 AD.

Eventually Tikal was abandoned completely, receded into the jungle, and more or less fell off the map.
During colonial times, a legend among the indigenous peoples in Guatemala was spoken of a lost city inside the jungle where their ancestors had thrived.
The stories of its existence started to surface in the 17th & 18th centuries.
In 1848 this legend became a reality. Tikal was discovered, arousing curiosity around the world.
A collector of chiclero, or gum-sapper, Ambrosio Tut reported the ruins to a La Gaceta, a Guatemalan newspaper, which named the site Tikal. 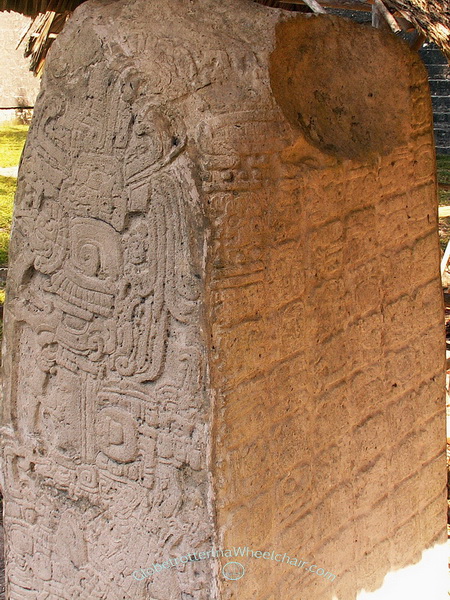 After a hundred years of roughing it overland by horse and foot to reach the site, a small airstrip was built in the mid-fifties.
The Berlin Academy of Sciences’ Magazine published a report in 1853 and archaeologists and treasure hunters then began visiting the forest.

During the 1960’s the University of Pennsylvania oversaw major excavation work at Tikal.
The government of Guatemala began the work in the late 1970’s of the archaeological site which you still see being done today.

As far as I know many beautiful buildings have been uncovered, but many more await to be discovered.

Tikal was designated a National Monument in 1931, and a National Park in 1955. It stood in for a rebel base in the original Star Wars movie in 1977 and became a World Heritage Site in 1979. 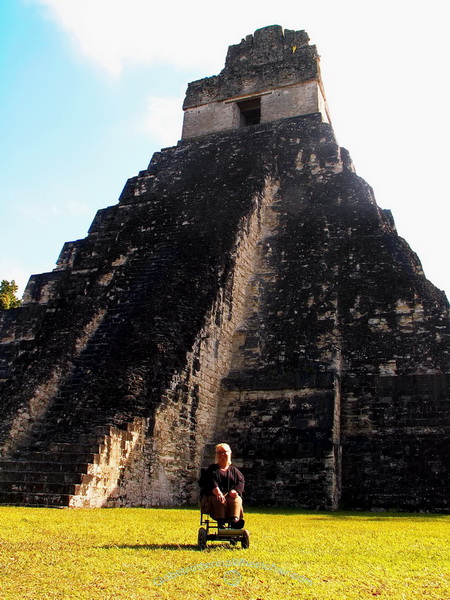 Our day at Tikal started out by waking up 3:45, it’s early, but the bus to Tikal comes at 05.00 – so indeed we have to be ready.
The bus does not stop outside our hotel as we were told, so we run after the bus. Which literally means Dieter runs pushing me and I scream for the bus to stop while my hair flutters in all directions and my wheels are spinning as if they were on fire. The bus driver catches a glimpse of us in the rear mirror and we get on the bus to Tikal. 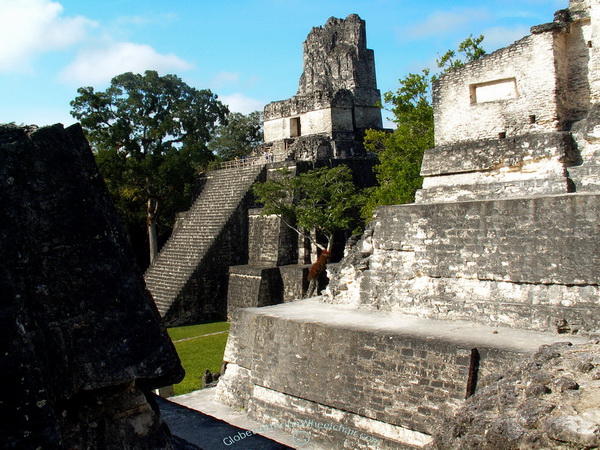 Arriving to Tikal the air is crisp and fresh. Our stomachs are growling and we start with a little breakfast. It is tempting to sit around all morning enjoying the cool air and the lush surroundings. It’s like the green jungle have decided to wear green today. No matter where you look the color green seems to appear in all its nuances. Even if I could count to that number it would be impossible to count all the shades and gradations.
When you are a city girl like me you think you wouldn’t be able to distinguish the sounds from each other. At first you think huh, this sounds like a jungle but if you sit quite still and really listen, you’ll be able to hear the cry from monkeys, birds’ call and the rest, well all you can do is guess and just enjoy the amazing symphony on the air.

The paths are reasonably passable with the wheelchair, but sometimes the hills are too steep. We work a way around them.
We see a few ruins before we arrive at Grand Plaza. It is a fairly large group ruins. I can’t really get in between the ruins, as there are stairs everywhere, but I can see most and it’s pretty impressive.
The architecture of this amazing ancient city is built from limestone and includes the remains of temples that tower over 70 m high, royal palaces, a number of smaller pyramids, residences, platforms and inscribed stone monuments. There are also courts for playing the Mesoamerican ballgame. 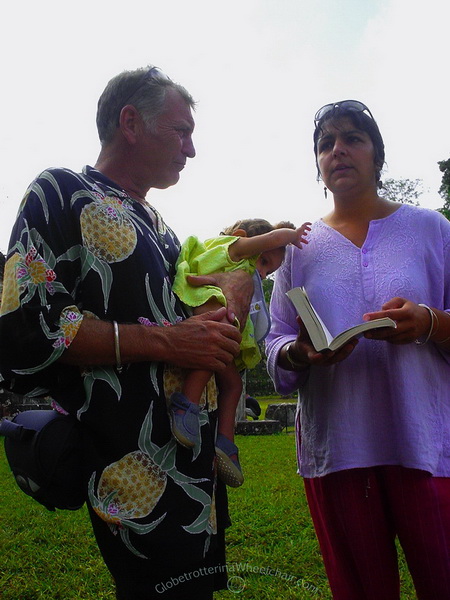 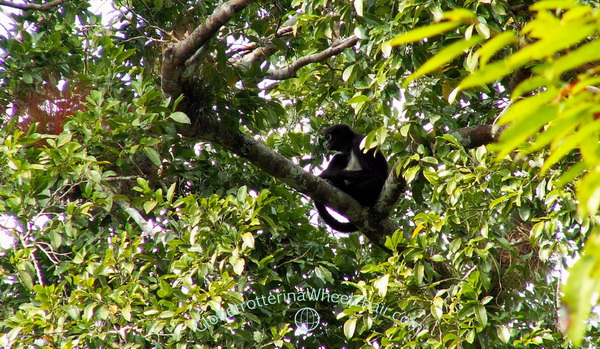 We meet Maya, Frank and Rani at Grand Plaza. Dieter  continuous to walk around the ruins exploring, while I talk to Maya and Frank.
Before we proceed from Grant Plaza, we see a bunch of howler monkeys in the trees. They are not as easy, I think they play hide and seek. We get quite lucky as we get to see a large group of spider monkeys. They are not shy at all and I think they are as curious to observe us as we are them. They are also quite busy eating nuts, throwing the shells on the ground making it sound like they are popping popcorn.
Not long after we see three different kinds of toucans. They are all quite beautiful. There is something magical about them. As if they come from a fantasy world with the colorful plumage and talking to each other in a secret language. We meet Lisbeth and Andrew from Canada. Lisbeth is originally Danish, but has lived in Canada for more than 30 years and her Danish is also a little rusty. We talk a little and they show us toucans in a bird book and convinces us they are from planet Earth. 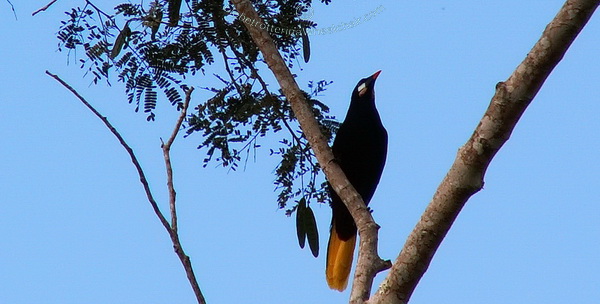 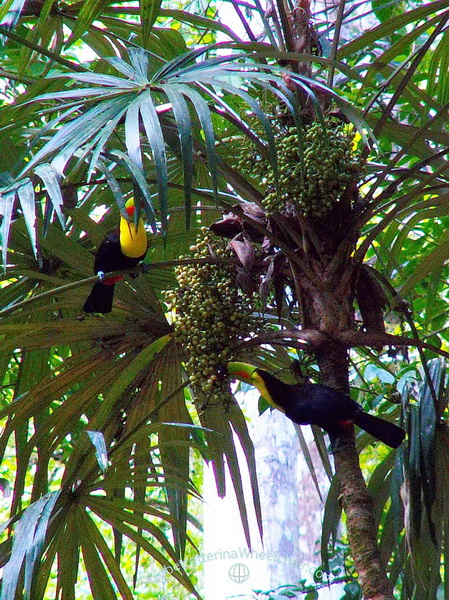 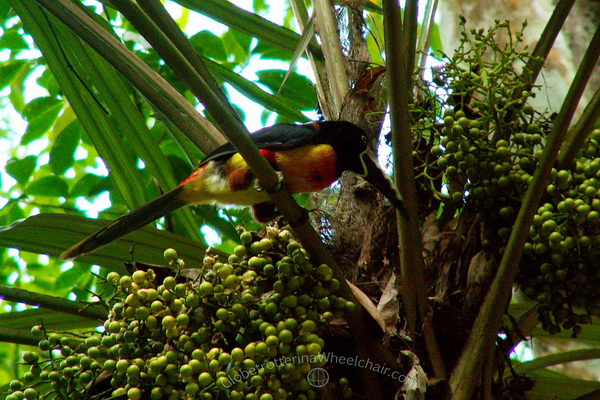 We see a lot of ruins that day and they are all quite impressive, but occasionally we need a break to absorb all the impressions and stories.  On one of those breaks we meet a guy who’s actually a guide at Tikal and suddenly as if it was all part of a great master plan, a spider appears. And not one of those tiny itchy bitchy spiders but a huge tarantula.
The guide asks us if we wanna see it up close? For sure!
He picks it up as if he had done that all his life.
It is unbelievable beautiful and fascinating at the same time. It’s a she the guide tell us and she is approximately 12 cm. in diameter and very hairy. Her abdomen is covered with fine red hair. She has four joints on the legs, as she is about 4 years of age.
When she appeared she came out of a hole and the guide guesses that she has a nest underground full of babies, so he gently puts her back on the ground so the babies won’t miss her anymore. 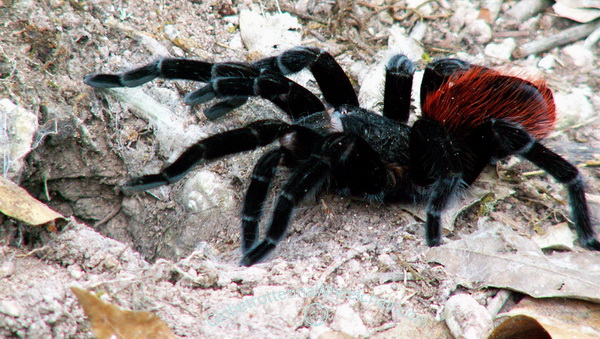 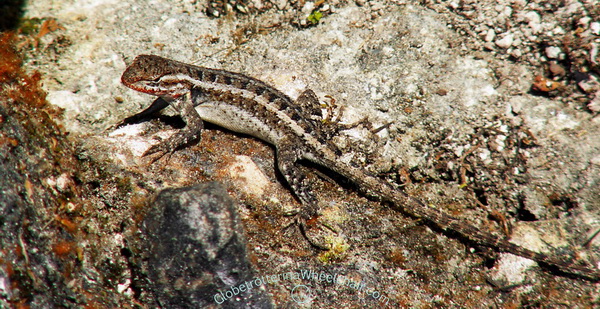 Tikal is perhaps the most breathtaking amongst the many Maya sites in Central America because of the scattered impressive buildings which have been restored in an area with many more ruined buildings still enveloped by the jungle.

The sight of the temples poking through the canopy is quite awesome. 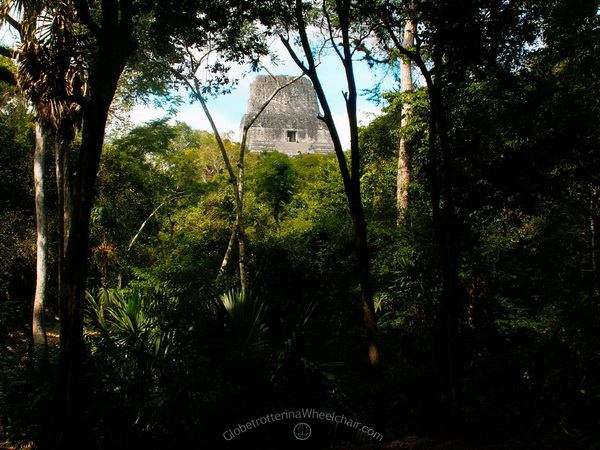