Do you know that when you walk into a shop in Valletta, you will be served with the same truism, whether you speak English, Italian or Maltese — pretty unique to Malta.

Malta is on the whole quite unique. With its 246 km2 is the main island only slightly larger than Coock Island. But it has been coveted. Namely, it has been both Phoenician, kartaginiensisk, Roman, under the Vandal kingdom, Goths, Byzantines, Arab, Norman, German, Spanish, French and British rule. For the same reason, the city has repeatedly, been the center of several violent sieges.

Only in 1974 Malta bacame an independent republic. 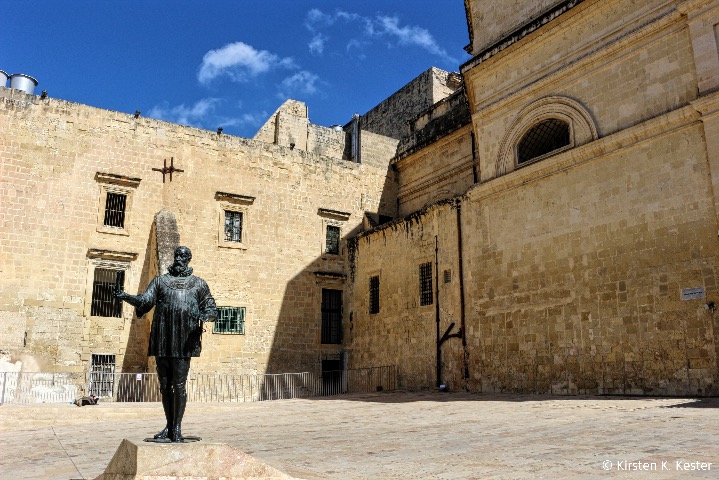 It was the Grand Master of the Order of Saint John, Jean Parisot de Valette who on the 28th. March 1566 founded Valletta when he literally laid the first stone for the city, and demanded it completed in just five years.

Malta’s capital city is being built as a fortress by the Order of Saint John after the great siege by the Turks in 1565. The city is a grid of straight streets, and is one of the first cities in the world, made with the grid system of roads that intersect at right angles. Grid system serves both military purposes and supposedly lets wind cooling around the houses a lot easier. 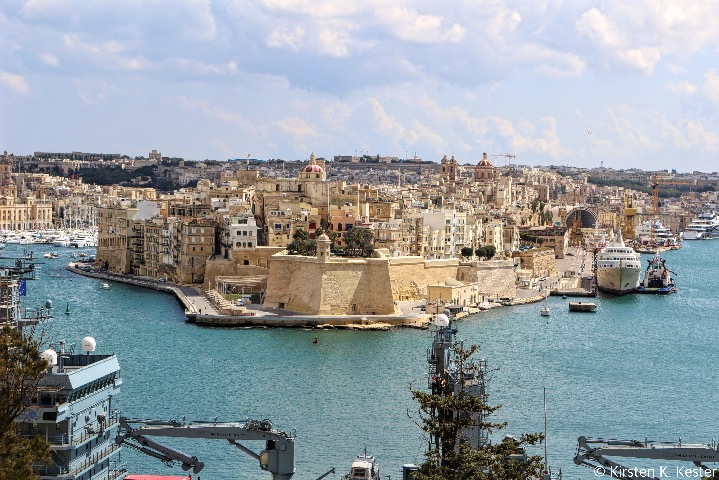 The city’s official name is Humilissima Civitas Valletta – “the humblest city Valletta”. The city’s bastions, masonry walls and ravelins, and the beautiful baroque buildings made it known as Superbissima – ‘the proudest’ – among Europe’s rulers.

When you as a humble tourist, with jaw dropped on the chest, exploring these magnificent buildings, it’s no wonder the city has had its admirable names.

I am blown away by all the impressions, and my eyes have a hard time finding rest as there are always new beauties to inspect, to photograph to be duped by. On almost every street corner there are beautiful sculptures, which in ancient times was a duty, if you owned a corner plot. 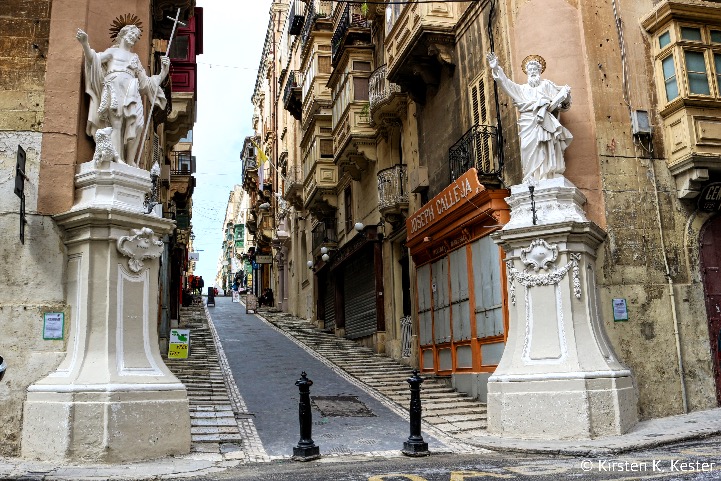 Rarely have I seen a capital city so beautifully located, and completed with Baroque architecture. The closed balconies, I have hardly seen elsewhere in such a large degree. I think they must have the same function as a nice winter garden.

The city is characterized by baroque architecture but also mannerist, neoclassical and modern buildings. Among the modern buildings you can enjoy the tight structured and very beautiful parlement. 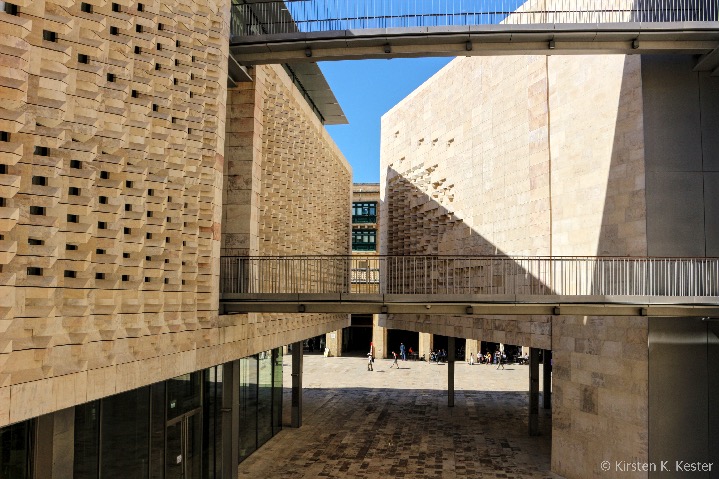 The houses in Valletta is like the rest of Malta built in the distinctive yellow limestone, but comparable Valletta is a historic gem, beautifully situated, and with a formidable view.
Because of my concussion, we only have a short afternoon to experience Valletta. So together with Dieter I whiz I around, and store as many impressions inside me as possible. 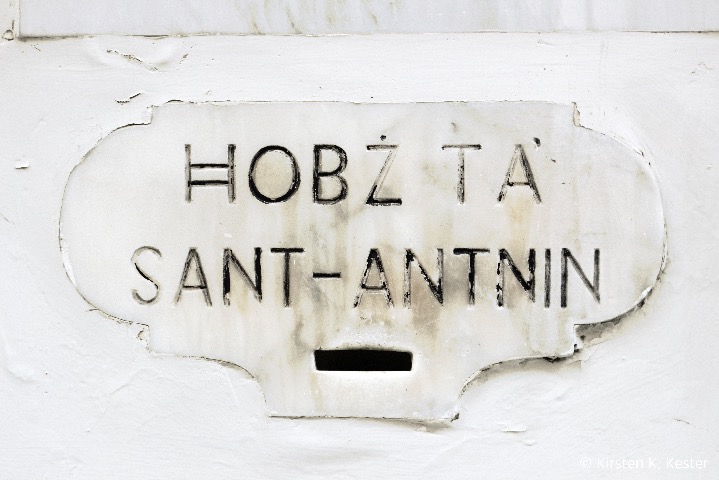 Earlier in our tour on Malta, I have seen similar streetsigns with the special letter Ħ – immediately I’m thinking it looks like a double bed, or my thoughts can easily imagine some beautiful Arabic fairytale from 1001 night, with canopies and snake charmers. Then again; it’s my imagination. I will have to look something like that up. My curiosity compels me to Aunt Wiki .. So if you too are curious, you can read more about the mysterious letter Ħ right here. 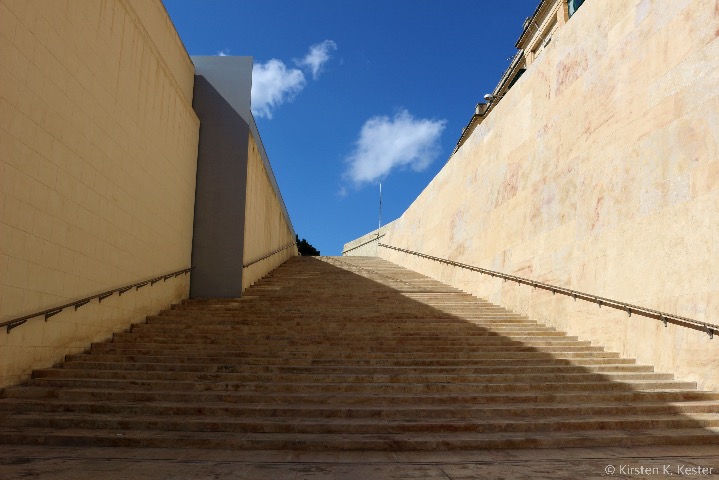 The steps are so low so it is easier for the Knights to walk on them in their stiff and clumsy armor.

In 1980 the city came on UNESCO World Heritage List.

Valletta was like many other European cities, severely bombed during World War 2.

Siege Bell Memorial’s. A memorial for Malta’s efforts during World War 2, created by the English sculptor Michael Sandle. Due to the intense bombardment Malta was exposed to; Maltese population received the distinguished order Georg cross from the English king, Georg 6th 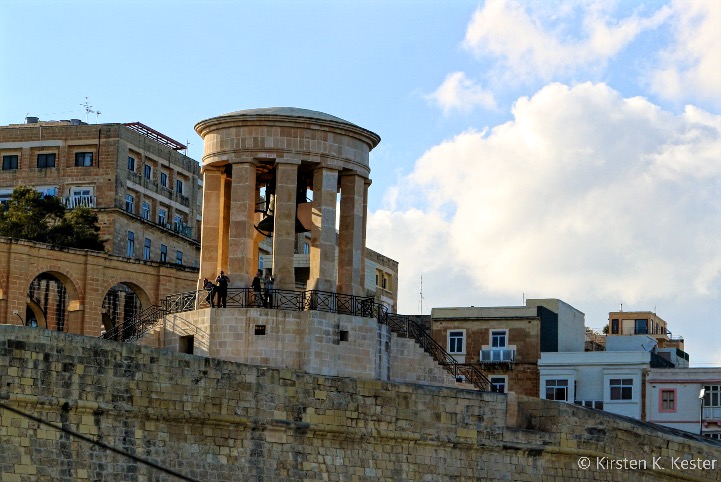 The cross is later inserted into the Maltese national flag. The memorial consists of a giant bell in a dome. In front of the 10-ton bronze bell, is a man figure on a six-meter long catafalque as a symbol of the approximately 7.000 Maltese and Britons who fell on Malta. The bell rings daily at noon.

Valletta may be thought of as the humblest town, but the reality is Valletta is impressive, and past history quivers in the air.