The summer of June 2014 the Okavango Delta was recognized as a World Heritage site by UNESCO.

The Okavango  Delta (or Okavango Grassland), is often mentioned as  THE MOST UNIQUE ECOSYSTEM IN AFRICA and for a very good reason.
The Okavango Delta is not only an amazing place, but also one of the worlds largest inland delta and the world’s largest undeveloped river catchment .
Coming from the mountains of Angola, it flows deep into the north-western part of Botswana, 1.700 km away.

You might think it would reach the Indian Ocean after flowing through the palm groves and papyrus swamps, but actually it sinks into the Kalahari sands. But before it’s dried up by the Savannah, the Okavango creates Africa’s most incredible oasis. 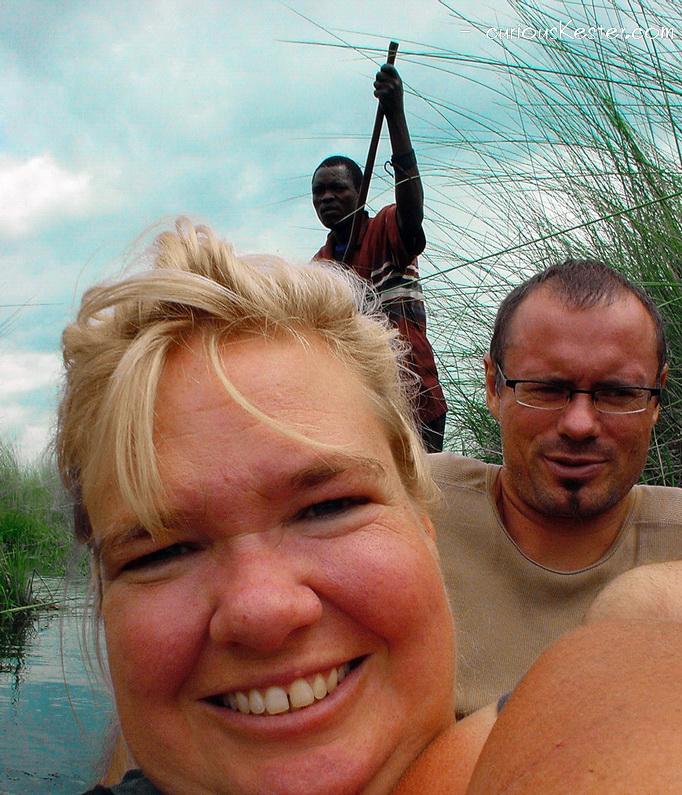 One of the essential qualities of the Okavango is that the annual flooding from the River Okavango occurs during the dry season, with the result that the native plants and animals have synchronized their biological cycles with these seasonal rains and floods.
It is an extraordinary example of the interaction between climatic, hydrological and biological processes. The Okavango Delta is home to some of the world’s most endangered species of large mammal, such as the cheetah, the white rhinoceros, black rhinoceros, African wild dog and lions.

The Okavango Delta peoples consist of five ethnic groups, all Bantus each with its own ethnic identity and language.

In the boat (the mokoro) you see a poler who’s is a local man who catches fish for his family and travels along the waterways between villages in the mokoro.
The mokoro is a type of dug-out canoe commonly used in the Okavango Delta.

My husband Dieter and I also traveled the waterways in a mokoro, and I tell you it was difficult. Well aware of the hippos and crocs in the surrounding waters we did our very best not to breathe and keep still. But it was deniable an almost impossible task.
First of all it was hard to sit still because you didn’t want to miss a single glimpse of the breathtaking scenery and second, . . . well It goes without saying that such a small craft is vulnerable to attack, but contrary to common belief, hippo attacks on mekoro (plural) are rare. I’ll admit it, the hippos circled in our minds . . .